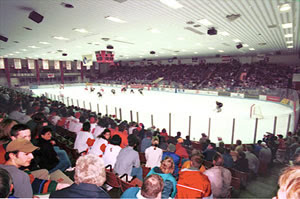 The Walter Brown Arena, BU’s first on-campus hockey home, hosted its first game 40 years ago today—November 27, 1971. During the next 33-plus years, the Terriers would play 528 games at the arena on Babcock Street, adjacent to BU’s West Campus. The final men’s game (video) was played on Jan. 2, 2005, a 2-1 loss to Minnesota.

When Jack Kelley became head coach of his alma mater in 1962, one of the first goals he set was to bring an on-campus facility to Boston University. With the assistance of the support group he founded, The Friends of BU Hockey, Kelley was the driving force behind the arena project, a goal he pursued while also returning the hockey program to top tier of Eastern hockey. In 1965, after The Friends reported a pledge list totaling $100,000, BU began a fund raising campaign that would raise $5.5 million for a complex that would house the arena, a basketball gym and a swimming pool. Financing was completed and after two years of construction, the doors of Walter Brown Arena opened as Kelley was about to begin his 10th –and final—season behind the Terrier bench.

Who was Walter Brown?
Walter was the son of BU’s first athletic director, George V. Brown, for whom the hockey team’s MVP award is named. In 1937, he succeeded his father as manager, then president of Boston Garden, a post he held until 1964. He founded the Boston Celtics, later purchased the Boston Bruins, and was a leading figure in U.S. amateur hockey circles. He was the visionary who created the Beanpot Tournament and also founded USA Hockey. Brown is the only person to inducted into the Basketball, Hockey and International Hockey Halls of Fame. His family also contributed to the building of the arena that bears his name.

Adversity yields unity
The Arena had been scheduled to open in time for the 1970-71 season; however construction delays and an ironworkers strike slowed its completion. The Terriers were forced to spend one more season sharing Boston Arena with Northeastern and practicing at Harvard's Watson Rink.

But, as the 1971-72 captain, John Danby, points out, “The van rides to Harvard in many ways brought our team together even more. We felt if the team, could deal with having to ‘shuttle’ back and forth daily to Harvard mostly dressed and sweaty, anything else we faced the rest of the year would be "a piece of cake" And it virtually was, as BU posted a 28-2-1 record en route to its first NCAA title.

Danby, a deadly sniper, would lead the ‘71-72 team in scoring (26-24-50) and earn MVP honors for the Beanpot and ECAC tournament as well as being named the Terriers’ MVP.

Chris Henes, manager of the 1971-72 team recalls: “Amid the hammers and drills, Coach Kelley became the first person to skate on the ice surface [of Brown Arena] in October of 1971, just before the first practices began. Later, members of both the varsity and freshman squads would assist in painting the lines as well.”

During the first few practices, defenseman Dave Warner remembers, “there was still a big hole in the wall in Section 1 that was used by the construction crews finishing up the work inside. They had a big piece of plastic taped to the walls to keep the hot air out.”

One amenity immediately appreciated by the Terriers was the locker room, which Warner described as “unbelievable with individual player stalls, director chairs, scarlet carpet and showers with hot water. Anything was better than the [locker room at] old Boston Arena." (Link-scroll to pg 57.)

Opening night
Even though Section 1 of the stands was still not completed and unavailable for seating, the curtain was finally raised on the Terriers’ shiny new on-campus home on Monday, November 27. BU was the defending national champion, but there was no banner-raising that day; that tradition wasn’t established until years later.

From the very start, WBA was a unique environment with its low metal ceiling—in contrast with the high arched ceilings in old hockey barns—that “fired the sounds of the game, the band and the fans back onto the ice,” Anderson points out. “That was especially intimidating for visiting teams. When I coached Merrimack College, it was very hard to communicate with my players at Walter Brown. You really had to be prepared for that noise”

Not surprisingly, student support for the hockey team spiked with the opening of WBA.
“BU hockey became a much bigger deal, with a real campus atmosphere,” Anderson adds. “And that really added to the players’ enjoyment.” The Arena seated more than 3,500.

Home sweet home
Besides being a state-of-the-art facilty, the new arena removed onerous time constraints from the players’ schedules.
“Living at West Campus meant a home game was really a home game,” Warner explains. “No waiting around in the cold slush to catch a ride to get to Boston Arena. With a short walk, practices were even better. After practice dinner meals were a breeze to get to unlike the previous year when we had to hop out of a van, wet from practice at Harvard, take a quick shower and rush to the cafeteria for food.”

Walter Brown Arena began its existence as the home of the NCAA champions and, at the end of its first season, that hadn’t changed. BU successfully defended its title with a 26-4-1 record, culminating with a 4-0 win against Cornell in the NCAA final at Boston Garden, making the Terriers the first Eastern school to win back-to-back championships.

“That team was on a mission to repeat and nothing was going to stop us from accomplishing that very prestigious goal,” says Danby.

“That season set the bar for future BU teams,” Anderson added, noting that BU was the most successful Eastern college hockey team in the 1970s, reaching the Final Four another five times, as Walter Brown Arena became synonymous with the dominance of Terrier hockey.

Today, Walter Brown Arena is the home of BU’s women’s team, which, just a few years into its existence, emerged as a national power, reaching the NCAA championship game in 2011. It also is home ice for Catholic Memorial High School.

For a look back at some of the most memorable games played at WBA, read Burn The Boats author Scott Weighart’s 2005 feature for USCHO, Remembering Walter Brown Arena.
Posted by Terrier Blogger at 4:19 PM