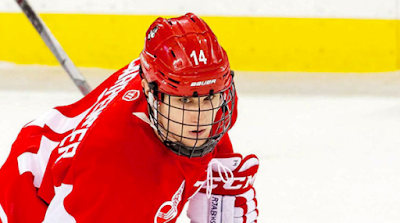 Q. What were the keys to the team's success down the stretch last year and how do you hope to keep that momentum going into this season?
A. Our team was able to keep our play very simple and hard, which helped limit serious mistakes that could hurt us during games. The best example of this was the Hockey East Championship against Providence. Our team could feel the energy we created throughout the game.

Q. Game-to-game consistency is something coaches at every level strive for. How will you help Coach O’Connell achieve it?
A. Communication. It’s the key factor between players and coaches. With this the coaches can make decisions aiding players on and off the ice to best prepare the team as a whole when its time to compete on the weekends.

Q. Besides the usual targets of winning Beanpot, conference and NCAA hardware, what are your goals for the team this season.
A. We want to be the best team in all areas of the game possible. This could be the fastest skating, hardest forechecking, or best defensive play. We will always try to improve as a whole.

Q. Coach O’Connell has indicated he’ll continue many—but not all—of the systems and methods of David Quinn. What are you seeing so far that is different?
A. Every coach has their own style and characteristics they want their team to grow into throughout a season. We will be a simple and hard working team every night. 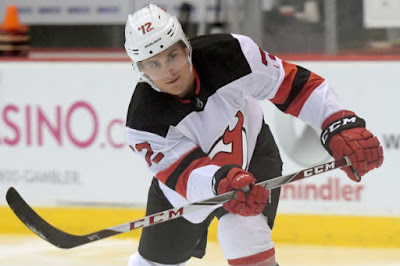 Q. You attended New Jersey Devils development camp again this summer, earning strong reviews. How have these experiences improved your game and prepared you to play an even bigger role this season?
A. The camps offer a great deal of information not only about on ice behavior, but off ice as well. I would try to be the biggest sponge and soak up as much information from all the working personnel each organization has so that I can incorporate different lessons into my own routines.

Q. You’ve played both center and right wing for BU and Coach O’Connell has indicated you’ll likely begin the season at center. At which position do you feel you’re most effective?
A. I have played most of my hockey career as a center as my father who was also a center has taught me everything he knows about the position. I would play either position depending on what the team needed, as it is also great to be able to play multiple positions.

Q. Last season, BU had the second-best power play among conference team—led by seven goals from you, Bobo, and 16 points from you, Dante. Do you anticipate significant changes to the power play system with Jordan Greenway and Brady Tkachuk gone to the NHL?
A. We will have two highly skilled power play lines as we have talented players across our roster. We have a lot of guys who can make simple plays to get the puck on the net. 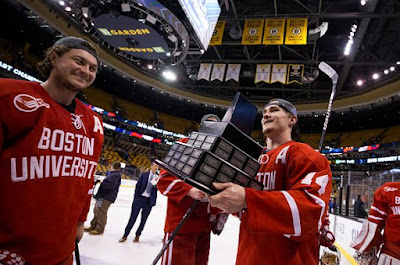 Q. Two years ago, BU had the best penalty kill percentage overall among Hockey East teams. That number took a dip last year. Do you see that turning around this season, especially with five returnees on defense?
A. We never want to be on the kill from the start, but we will defend our net with everything our team has. We strive to be the best at all areas of the game.

Q. We always ask this in the captain’s Q&A: which returning player (or players) will surprise BU fans by taking his game to a higher level?
A. Patrick Harper will come out stronger than ever, as he unfortunately had to miss the second half of our season last year. He is a player in the locker room that brings an entire new dynamic of play when he is with the team. His dedication to the sport matched with his skill is not only a treat for fans to watch, but his teammates to play with as well.
Posted by Terrier Blogger at 5:21 AM