Book Review: “The Making of a Miracle” 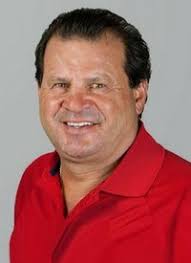 By all accounts, Mike Eruzione and Jack Parker have been great friends for more than forty years. If you’re familiar with their backgrounds, the source of this friendship shouldn’t be much of a surprise. Each of them was raised in modest circumstances in hardscrabble towns; Eruzione in Winthrop, Parker in Somerville.

Parker demanded a high degree of competitiveness and determination from his players at BU. Eruzione cites these attributes as his greatest strengths.

Parker’s acceptance speech at his induction into the US Hockey Hall of Fame acknowledged the dominant role “coincidence” played throughout his career. In “The Making of a Miracle”, recently published by Harper Press, Eruzione, via co-author Neal Boudette, proudly and repeatedly asserts that chance played no less of a part in his life. 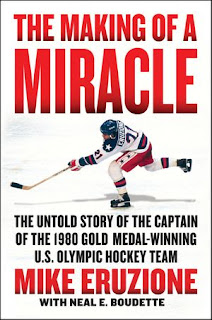 Eruzione’s honesty about all facets of his upbringing and career is the central theme of the book. He was raised in a “three-decker” in working class, insular Winthrop. His family lived on one floor; aunts, uncles and cousins occupied the other two. In fact, he terms the arrangement as “three floors, no doors” that housed one large, rambling family. His father, Eugene, known as “Jeep”, worked multiple jobs. Mike caddied and shoveled snow, giving the money he made to his mother.

When he wasn’t working, Eruzione was consumed by sports. He played baseball, football and hockey. Above all else, he thrived on competition. He found his first mentor in Bob DeFelice, the Winthrop High School football coach. “Deefa” demanded discipline and competitiveness from his team. Eruzione flourished in this environment. Football became his “passion”.

Serendipity first appears in Eruzione’s life during the summer after a year spent in prep school. Having drawn no interest from Division 1 schools, he was on track to attend Merrimack College, play Division 2 hockey, and eventually become a teacher while coaching multiple high school athletic teams. In fact, it seems if that had become his destiny, Eruzione would have been happy.

However, with nothing else to do one August night, Eruzione decided to play a game of pickup hockey and returned home with a scholarship to a Division 1 college. Some of his buddies just happened to play in a summer hockey league and just happened to need another player for the evening’s game. Eruzione grabbed his hockey equipment and accompanied them. By chance, Jack Parker officiated the game that night.

At the time, Parker was an assistant coach at BU, charged with recruitment. By chance, a couple of players he thought he’d recruited for BU went elsewhere. Parker was impressed by Eruzione’s play. Needing two players on short notice, Parker asked him what his college plans were. When Eruzione responded that he’d received no interest from Division 1 schools, Parker offered him a scholarship to BU. Parker filled the remaining scholarship by recruiting Rick Meagher who became a three time All-American and Eruzione’s lifelong friend. Coincidence and happenstance, indeed.

Eruzione’s career at BU had a rough start. He was buried on the JV team, at first, and hadn’t advanced above skating the fourth line when circumstances intervened again. BU fired Head Coach Leon Abbott due to “recruiting violations” shortly after the season started.

The beneficiaries of Abbott’s dismissal were Parker and Eruzione. Parker became Head Coach, inheriting a very talented team. Again, Eruzione was playing for a coach who demanded and appreciated competitiveness, hard work and determination.  Eruzione thrived at BU as the team won the championship of eastern college hockey each of his four seasons. They never won a National Championship, however, and never advanced to the championship game, which Eruzione regards as a “blot on my career.”

Following graduation from BU, Eruzione knocked around the minor leagues of professional hockey. The era in which talented college players advanced to the NHL hadn’t quite dawned. Again, chance plays a role in his future. While playing in various minor leagues, Eruzione had played nine games in leagues that were considered “professional” by international standards. If he’d played a tenth game, he’d have lost his eligibility for the Olympics.

He participated in the National Sports Festivals during the late seventies. The US Olympic Ice Hockey committee used these games to select the players who would comprise the 1980 Olympic team. Herb Brooks, who would coach the team, was already familiar with Eruzione from the small world of college hockey, and through his play for the US during international tournaments.

For longtime college hockey followers, much of the book’s appeal lies in the background Eruzione and Boudette provide about the game during the seventies. Eruzione describes what it was like to play for Parker, the personalities of some of his teammates, the depth of BU’s rivalry with BC and detailed descriptions of key moments of important games BU played during his college career.

The second half of the book covers the entire Olympic experience, from player selection and training camp, through the long pre-Olympic schedule and the games themselves, to the glorious aftermath and celebration of the Gold Medal victory.

Again, Eruzione provides extensive detail. He describes the dynamics among the players, the East – West animosity that marked the team after it was first assembled, and key games played prior to the Olympics. Herb Brooks is center stage at this point. Eruzione and Boudette do a terrific job portraying Brooks’ single-mindedness, especially his relationship with the players.

Apparently, Eruzione and Boudette reviewed films of all games played by the US during the Olympics. If not, then Eruzione must have a world class memory. They recount the essential details of all contests and the flow of play that led to critical goals. They devote two riveting chapters to the “Miracle” game against the Soviet Union. Chance re-enters Eruzione’s life as he hopped onto the ice and into the Soviet defensive zone at precisely the right moment to collect a pass and score the goal that changed the direction of his life permanently.

Essentially, Eruzione recounts the final ten minutes of the game, as the US protected its one goal lead, on a shift by shift basis. He provides detail and insight that even avid hockey fans may not have known or appreciated previously. 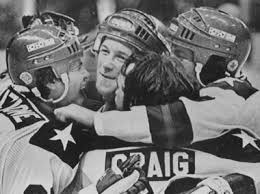 In the final chapters, Eruzione describes his post-Olympic, post-hockey life. He acknowledges that fate has provided him with many opportunities over the last forty years. However, he leaves the impression that he’d have been happy with his life even if he hadn’t met Jack Parker, maintained his amateur athletic standing or scored one of the most celebrated goals in hockey history.

An optimistic outlook for the second half

The Terriers head into the second half of the season with a good bit more optimism than their 6-6-5 record would suggest.

For one thing, a few key players sidelined by injuries are back in the lineup, or will be soon. Although the team had some disappointing performances in the first semester, they finished up with excellent showings in their final two games – a 5-2 win over Harvard and another over Northeastern, 6-3.

“I’m really excited about it,” senior captain Patrick Curry said this weekend after a 3-3 exhibition tie against the USA NTDP U18 team. “If we are able to play with a full team, I think we’re going to have a great second half.”

That team includes two mid-season additions, center Wilmer Skoog, a 20-year old center from Sweden who had been playing in the NAHL, and Canadian goaltender Ashton Abel, also 20, who spent the first half of the season in the AJHL.

“We have a couple of new pieces coming in with Skoog and Abel,” Curry said. “And a lot of guys returning from injury. That was a big issue for us in the first half of the season.”


The Terriers kept on the winning track Wednesday with a 3-2 overtime win against Brown, in which Skoog picked up the game winner.

Coach Albie O’Connell said Skoog showed he can make an impact in the NTDP exhibition, when the newcomer scored in the shootout.

Perhaps the biggest impact will come from the return of junior Logan Cockerill, who underwent wrist surgery after appearing in just three games. Cockerill is expected to return this month, possibly in time for the Boston College game on January 18. Freshmen Sam Stevens and Jamie Armstrong also missed games in the first half but have returned to the line-up. Junior Ty Amonte is out for the season.

Both Cockerill and Skoog will likely take spots among the top six forwards, which will have a ripple effect by leaving more talent and grit to fill out both the third and fourth lines.


“Getting Cockerill back will be a big bonus,” O’Connell said. “With him and Skoog, we get two guys in the lineup who can project a lot of speed. So, we like our chances in the second half.”

O’Connell also noted that he is looking for Ethan Phillips, who set up Skoog’s OT goal against Brown, to take a step up and become an even bigger contributor.

Curry said he’s looking forward to having Cockerill back both on and off the ice. “When he talks, guys listen. So, we missed him. Having him back is another speedy forward who plays the game right and plays a 200-foot game.”

Another reason for optimism is that BU is still in the hunt in Hockey East. Despite the ups and downs of the first half, the Terriers have three fewer league losses than all but two teams – BC and Lowell – and tied with UMass. Although BU is technically in sixth place in the league, they are only three points out of first place, and with half of the season remaining, they can put themselves into contention with a run of wins over the next few weeks.

Curry said the team needs to become more consistent than in the first half. “Sometimes in our game, it’s really good. We need to play a little more even keel, not give up big chances and play a more sound defensive game,” the captain said. “Upfront we have a lot of good speed. From the back end, a lot of guys know how to move the puck well.”


Those two wins in December against Harvard and Northeastern are strong indicators of what the team is capable of. “Those were huge,” Curry said. “We could have gone into the break losing those games or tying them, and instead we got four points. We know we can beat a top 10 team even without our full lineup. That’s good for the team’s confidence. And we’re definitely going to try to build off of that.”


BU is no stranger to second-half hot streaks. Two seasons ago, BU appeared down and out in January 2018, but caught fire and secured an NCAA berth by winning the Hockey East title over Providence.
Posted by Terrier Blogger at 9:28 AM No comments: