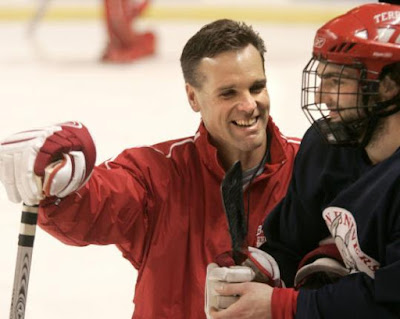 Q -When the NTDP U18s visited last season, it was reported that they “loved BU’s style of play” What do you think they meant and why might they feel that way?
A- Hopefully the word spreads. That’s never a bad thing to have people say that, especially the national program, which is the age of players we’re recruiting. One of the things we stress is a puck-possession game. There are times you have to chip a puck in, but that’s not the way we want to play. We kick loose pucks in the neutral zone back to our defense so they can possess it and enter the zone with speed. A lot of teams will post a guy at the blue line and have him chip it in and go get it. That’s not how we want to play. We want to carry the puck into the offensive zone and attack with speed. We need our defensemen to be involved in the attack; so, it’s something we’re constantly stressing.

Q - Let’s look at the Terrier offense.  While there is much returning and incoming talent, BU has lost not just the two top scorers in the nation, but arguably the two most creative forwards from last season.  Do you expect to maintain the up-tempo, pressure offense that made BU such a dangerous offensive team last season—both at even strength and on the power play?
A-If you’re going to create offense, you need to have all five guys involved. Our approach isn’t going to change despite losing three guys who produced offense. We’re really happy with our returning core and feel the freshmen will be able to contribute offensively. On our D corps, they’re all puck-moving defensemen who make good decisions and good plays. That’s how we’ll create offense. In the two exhibitions and regular-season games, we scored four goals three times. If we keep doing that, I like our chances.

Q -What are you and the assistant coaches doing to turn the page on last year’s extremely successful season while retaining the systems that were so effective as well as the team’s swagger?
A- We don’t talk that much about last year. Every team has its own personality and identity, no matter how many guys are returning. Our returning guys learned a lot about what it takes to be successful, especially those who were here for the difficult year before. The seniors have experienced a bit of everything: just missing the national tournament, then having a down year and last year nearly having the ultimate experience of winning a national championship. To have the kind of year we want, you have to have talent, which we do. And you have to have team chemistry, have resilience and mental toughness and not be selfish. We’ll find out during the next few months if we have all those things. 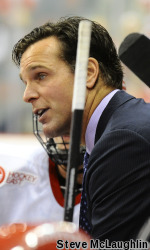 Q -With last year’s four freshman defensemen having a year of experience, including pressure-filled post-season games under their belts, what improvements do you expect to see on both sides of the puck from each of them?
A-They’ll be more comfortable and there is an expectation that they’ll all improve. Everyone talks about our offense last year but our defense had much to do with that. We didn’t spend a lot of time in our own end. We transitioned well and now, with those guys being a bit bigger, stronger and faster, hopefully they’ll continue to make great decisions. Sometimes at this level, a guy takes a step back before taking a step forward; hopefully, we won’t go through that.

Q -You’ve gone on the record as preferring that one goalie take control of the top job rather than employ a rotation. Given that Sean Maguire is returning after taking a medical redshirt last season and Connor Lacouvee’s limited experience, do you see one of them seizing the starting spot?
A-I’d prefer that it be one guy, but if you’ve got two, I’m not opposed to rotating. If both are playing really well, you keep playing both. We have two really good goalies and they’ll both have an opportunity to seize the job. Time will tell.

Q -Your coaching staff has undergone changes, too. How will Scott Young’s role as a coach differ from what Steve Greeley did and what does Chris Dyment bring?
A-Scott is sliding into the role Albie played before he stepped up as associate head coach. One of the things we’re fortunate to have is two guys who love to coach and recruit. Scott has recruiting experience at St. Mark’s and he’ll be a valuable on-ice addition to the staff. Chris has paid his dues, coaching at the junior level, where you’re also the general manager, the equipment manager, even the skate sharpener—a lot of different hats. He was a great player here, he’s well respected and he’ll be a great asset to the program and to me. 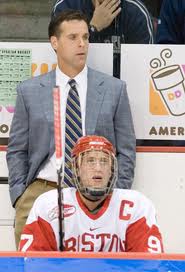 Q - What are three keys to a highly successful season that would put BU back in the Garden next March and back in the NCAA tournament? With his NHL track record, he’ll definitely be a positive influence on our players.
A- Number one, you have to remain healthy. Number two is having a strong work ethic. College hockey is so competitive that you must be ready to play hard night in and night out.  And three, you need to have a true team with guys committed to the cause. We’re at a level where everyone aspires to play in the NHL and fortunately we have players who have the ability to do that or have the possibility to do that. But in the process, they must be committed to BU hockey and our team concept. We had that last year. In any college level sport, when you’re playing for the team, you have a much better chance of success. Those are the ingredients needed to have the kind of season we’re capable of having.

Q –Which returning player is going to surprise Terrier fans, if not his coach, by taking his game to a higher level?
A bunch of guys pop into my head; but I’ll say Matt Lane, who already is off to a great start. He’s a guy who might surprise people because he has really good offensive ability and, going into his senior year, he’ll have more opportunities to be productive.
Posted by Terrier Blogger at 3:51 PM No comments: