“The Next Ones” prepare to visit Agganis

If familiarity breeds contempt, well then Thursday night’s exhibition game ought to be more than your standard pre-season match up.

The Terriers face off against the USA NTDP U18 team featuring three players – forwards Brady Tkachuk and Logan Cockerill, and blueliner David Farrance – who will come to Agganis in 2017. Those guys know the BU line up well. A year ago, they were NTDP teammates with the four alums of the program now skating in scarlet and white as freshmen – Clayton Keller, Kieffer Bellows, Chad Krys and Jake Oettinger.

Behind the scenes, more than a few texts have already been exchanged in anticipation of renewing acquaintances.

“Yeah, I talked to Keller a little because we played golf a lot last spring,” Farrance told me after a recent practice at USA Hockey Arena in Plymouth, Mich. “He thinks they’re going to kill us and I tell him I don’t know about that.”

“I told Oettinger I’ll see him in front of the net,” Tkachuk added. “Hopefully he doesn’t give me a slash to the back of the legs.”


"Tkachuk won a battle in the crease there, to the surprise of absolutely nobody." #WhosNext pic.twitter.com/yZK1fCDwVp
— USHL (@USHL) September 26, 2016

Tkachuk scores in tight on a rebound

Cockerill, for his part, said he’s psyched to play in Agganis for the first time. But he knows it will be a tough challenge, and expects that BU will surely be ready for them. A year ago, the NTDP U18 featuring Keller & Co. came into Agganis and walked out with win.

“We’re going to be playing against some good competition – Keller and Krys and Bellows and Oettinger, plus all the other talent they got,” Cockerill said.

“The guys who were [with NTDP] last year are going to be tough to play against,” Farrance went on. “They’re all going to want to play their best because they’re playing their alum team. I think it will probably be one of our hardest games of the year.”

Cockerill, Tkachuk and Farrance are all off to strong starts this year. The BU match up will be the second of 11 games scheduled with D1 teams this season, including one versus Harvard two days after their visit to Agganis. They also have five games against D3 schools. 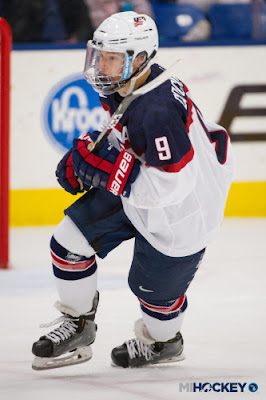 A Michigan native, Cockerill caught the eye of BU coaches because of his strong skating stride, intensity and awareness on the ice. So far this year he has a goal and a pair of assists for NTDP. He also had a nice goal in the recent All-American Prospects game in Philadelphia, a play that turned the heads of some scouts.

Last year with NTDP, he was 6-15-21 and developed a knack for creating scoring chances on the forecheck. In some games late in the season, Cockerill looked like one of the best players on the ice. He was slowed, however, by a separated shoulder, which took him out of the line-up for a few weeks.

He’s a rare find – a Michigan kid who did not grow up dreaming of suiting up for Michigan. He lives in Brighton, just north of Ann Arbor. But while playing AAA hockey with Belle Tire, he played in some tournaments with Boston and got the bug for playing in the Hub.

“I visited a lot of schools and when I visited BU, I just loved it. I went on a visit with my mom and Albie O’Connell showed us around. I loved the city campus. I loved having the other colleges like Harvard and BC nearby, and the rivalry around the city.”

His older brother Garret plays for Northeastern. If Garret, a junior, returns for his senior season, the two could end up facing each other in the Beanpot.

“I hope he stays,” Cockerill said. “I’m trying to convince him.”

For now, Cockerill is just pumped to make his Agganis debut, and face the challenge of playing against a college line up with four first-rounders, three second-rounders and more.

“I’m going to have some nerves. It’s definitely different playing against college teams,” he said, “but I’m very excited.” 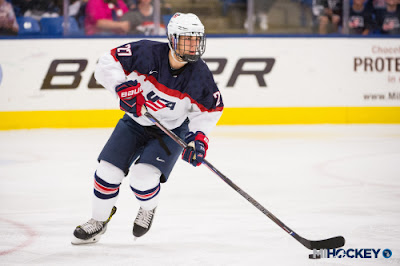 Through seven games, Farrance, 5’11” and 187 lbs., has two goals and an assist. But more telling is that he’s been piling up shots on goal and blasting the puck from the point.

When told he seems to be emerging as a key part of NTDP’s offense, Farrance shrugged it off. “Yeah. You shoot the puck, sometimes it goes in.”

He said he’s been focusing on getting stronger and improving his shot. “Lot of lifting. And you’re always shooting pucks in the basement. That’s how I spent most of my days in the summer, mostly. Thankfully it’s paid off. I feel faster and my shot feels harder.”

The need to work hard is something that has been emphasized at NTDP, Farrance said. Overall, he thinks the program has been a great learning experience. “Being here, it makes you want to be a good person for your country day in and day out. It forces you to. Because you have to represent your country well. Even if you’re not wearing your jersey, you’ve always got that USA crest on.”

Farrance grew up in Victor, N.Y., near Rochester. Before coming to NTDP, Farrance skated for Syracuse in the USPHL and often played in Boston, trips he used to see several BU games. He also looked at that other school up the road.

“I’ve been to a lot of BU games. I’ve seen a lot of BC games. I liked BU a little bit better,” he said. “I visited both schools, but spent more time at BU. I just wanted to keep going back to BU and watching games there. I just liked BU, and the city. It’s pretty cool being in the city and right next to Fenway.”

It didn’t matter that his NTDP teammate and childhood buddy from Victor, Jake Tortora, opted for BC. The difference was he felt really comfortable with the coaching staff of Dave Quinn. And Agganis, of course. “The locker room and the training room and the arena, it’s all you can ask for. The fans are crazy about hockey and I love that.” 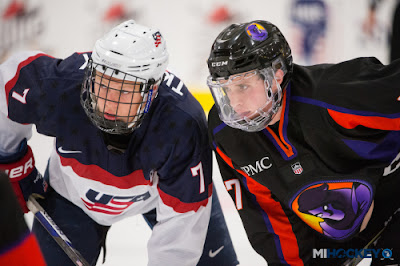 The son of BU legend Keith Tkachuk is a bruising forward in the mold of his father. At 6’2” and 194 lbs., he’s a big body and does his best work in the dirty areas of the ice. So far this year, he’s 2-4-6. He said he’s loved the idea of playing at BU for years.

“Usually every year, February comes around, my dad and I put the Beanpot on. He still loves talking about his days at BU. We love watching that,” Tkachuk said.

So when it came time to decide on the next step in his development, it was a no-brainer. “We live on Cape Cod in the summer, an hour away, and we have family in the Boston area. It was an easy choice, a win-win, to play for one of the best colleges in the nation and I get to see my family a bunch.”

He’s especially looking forward to the rivalry with BC, where two of his cousins, Ryan and Casey Fitzgerald, play.

“My dad likes to tell me about the rivalry,” Tkachuk said. “Very intense between the two schools.”

A year ago, Tkachuk was 9-16-25 at NTDP. He said the program has been “the best experience. Great coaching staff, showing us how to play, how to carry ourselves off the ice.” And he gives a special tip of the hat to Lisa Volmers, director of student-athlete services. “She does a great job keeping us on track with academics.”

Tkachuk said he’s been in touch with all of the NTDP alums who are now freshmen at BU and is “super excited” for Thursday night’s game. He’ll have support in the stands. His father and a load of family members are going to be in attendance. “I think I have close to 20, 30 family members going to the game,” he laughed.