In the bronze-medal game at this year’s U18 World Championships, Team USA was leading Canada 2-1 in the middle of the first period when the puck came to Clayton Keller in the left circle.


Many Terrier fans are hoping that what happened next is a preview of what’s coming to Agganis Arena this fall.


Keller, a BU recruit, had his back to the net. Glancing over his left shoulder, he spotted Kieffer Bellows, his teammate on the USA National Team Development Program this past season and also a Terrier recruit, drifting down from the blue line on the other side of the ice. 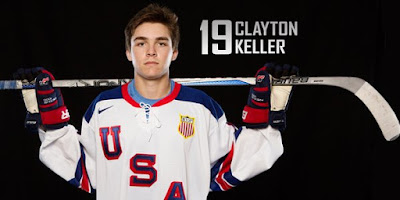 Rather than continue to his left, Keller suddenly spun around the opposite other way to his right, and in one motion whipped a blind pass across the ice. The puck threaded through three Canadian players caught off guard by the unexpected move, but the recipient wasn’t surprised in the least. Bellows reached the puck in full stride and one-timed it into the Canadian net.


You can see the play here https://www.youtube.com/watch?v=oubc_WQIEBA at the 1:10 mark. If you haven’t seen it, it will make your jaw drop.


“That was probably our coolest,” Keller said when I sat down with him and Bellows in May, after an off-ice workout at USA Hockey Arena in Plymouth, Mich., where the NTDP program is based.


It was by no means their only head-spinning play during the 2015-16 season. Asked to recall a few highlights, their conversation mirrors their on-ice play. Keller to Bellows and back to Keller. It’s Keller who starts, and Bellows who finishes.


“The Youngstown one, “ Keller said.


“Yeah!” Bellows responded. “Our very first USHL game. Was it my first goal?”


“Yeah, my second goal, where you kind of wrapped it around. Kells did this play behind the net where he fakes like he’s going around and he passes to me and the goalie’s already on the other side and I just shoot it in a wide-open net. Something we talked about doing, but didn’t’ know it would actually turn out.” 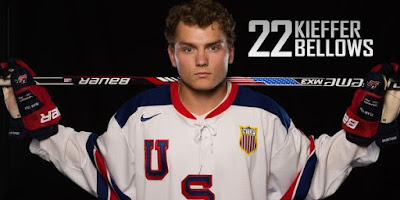 Keller is a likely top-15 pick in this month’s NHL draft while Bellows is seen as a middle to late first-rounder. They’re also considered sure-fire linemates when they arrive in Comm Ave. this fall.


They haven’t heard anything specific from Quinn about lines for next year, but Keller said he thinks the chances are pretty high it will happen.


Come October, you can bet Bernie Corbett will know their names and numbers by heart.


Keller and Bellows are part of a monster in-coming class of eight recruits that includes their NTDP teammates Chad Krys, a defenseman, and goaltender Jake Oettinger, as well as Canadian defenseman Dante Fabbro, another projected first-rounder.


This influx of talent will join a talented core featuring skilled forwards like sophomores Jordan Greenway and Jakob Forsbacka-Karlsson and a loaded blueline featuring NTDP alum (and yet another possible first-rounder) Charlie McAvoy. The combination should again have BU in the hunt for titles next season.


For Coach Dave Quinn, could there be a more obvious no-brainer than to keep Keller and Bellows? Keller racked up 37 goals and 70 assists this year for 107 points, becoming only the third NTDP player to break the century mark in a single season. The others? Auston Matthews, the likely No. 1 pick this year, and another guy, name of Kane. Pretty good company.


Bellows, the son of former NHLer Brian Bellows, merely led the NTDP U-18 squad in goals with 50, and added 31 assists. His 81 points were second only to Keller.


Bellows spent a year with the USHL’s Sioux Falls Stampede before jumping to the NTDP U-18 team last fall. He hoped to play with Keller, who was a teammate once before in a Bauer Selects tournament in Russia.


“I knew he’d be very complementary to me,” Bellows said. “I came in [to NTDP] and Coach [Danton] Cole said I would be playing with Joey [Anderson, a UM-Duluth recruit] and Kells. It worked out pretty well. It’s worked our really well and we’ll see what the future holds at Boston.”


After the first couple games, “we started to realize what all three of us can do,” Keller explained. “I’m a passer. [Kieffer] is a shooter. Joey can do everything. Kiefer’s always getting open when I get the puck. It makes it easy for me. It’s just a matter of playing our game. So it’s pretty special.”


When I talked to them, both players expressed enthusiasm for putting on the scarlet and white, and getting the chance to skate with the top-end talent BU has.


“I’ve gotten to know Charlie from my official visit. I’ve gotten to know Jordan because his younger brother, JD, is my roommate. I know JFK pretty well. He’s a good guy. I got to play against him a lot my first year in juniors,” Bellows said. “From going there on my first visit – I don’t know if Kells feels the same way – but I felt they were a really close team, and they made us feel really comfortable, so I feel like we’ll fit right in.”


In pro hockey circles, speculation continues that Keller might defect to the OHL, where the Windsor Spitfires owns his rights. He recently told NHL.com that he thinks the chances of him going to Windsor are “slim,” adding that BU is his “top choice” and “the best fit” for him.


When he spoke to me, he gave no indication of second thoughts to becoming a Terrier.


“We’re both headed to the [NHL] combine, then the draft, and then it’s off to BU in July for a month or so to get classes done,” he said.  “I know Jordan and Charlie from playing with them last year. So I’m just looking forward to meeting all the guys and getting to play and practice with them.”


Here are other highlights from my conversation:


Q: What was your first contact with BU and what convinced you that was where you wanted to go?


Keller: I can’t remember the exact date but it was the Select 15 festival in July 2014. That was my first get-to-know. They reached out to my family advisor and then I went on a visit that same year. I just really liked the facilities and Coach Quinn and Steve Greeley, when he was there, really made me feel comfortable, and just seeing all the great players who have come out of BU. It seemed like a good spot for me.


Q: Kieffer you mentioned a few weeks ago you wanted to go to a school where hockey was the main sports.


Bellows: I wanted to go to a school that’s mainly focused on hockey and you see that with BU. Their fans just love the game. They’re very passionate about it. My first contact with BU was right before the tryouts to come here to the U-17 program [in April 2014]. I took a visit out there and I just fell in love with it. I just knew it was something that I’d really be comfortable with, if I wanted to go there. Then I took my time and made my decision. I felt like it was the best decision because I knew if I went there I’d have a better shot at playing in the NHL one day, with the coaching staff of Quinn and Coach Young and Albie O’Connell.


Q: Did you have any influence on each other?


Keller: I didn’t know they were talking to [Kiefer] that much, but obviously I’m looking forward to playing with him. Last year Chad Krys wasn’t committed and I had a little bit of influence on him, just trying to get him to go to  BU, too. And obviously Jake Oettinger, too. I tried to get as many guys as I could who would help our team next year.


Q: What has NTDP meant for you?


Keller: Just being able to represent your country every day is something that is really special. Not every kid gets the opportunity to do that at such a young age. And everything they offer you here, with the weight training, the ice time, the nutrition, is really special. I think it was a great two years. I was really thankful I got to play here.


Bellows: It was a little different coming in during the second year. I can tell I really improved as a player with all the off-ice training. You have to learn to really respect everybody around with representing your country every day. It’s something you may never get the opportunity to do again, so you have to take advantage of every opportunity.


Q: How much have you gotten to know the college hockey scene in Boston?


Bellows: The first thing that pops into your head when you hear college hockey in Boston is the Beanpot. This year we got to see their first game and it was really cool to see what it’s actually like. Last year I watched it on TV, but to see it in person was really cool. To see the student sections and the fans and how much they love the game.


Q: And the BC rivalry? There are four NTDP players headed to BC, including a guy you may be shooting on, goalie Joe Woll.


Keller: Obviously they have a big rivalry and it’s just a battle.


Q: Why did you pick the college hockey route?


Keller: Just playing against older, stronger players is the biggest thing. Also the weight training in college is really good, and obviously you get your education. You grow as a person. I think those are the main things why I chose college.


Bellows: That’s really it. You’re playing against older guys who are possibly stronger than you. It’s good in case anything ever happens to have a [college degree] to fall back on. It’s something that a lot of guys don’t appreciate as much as they should. A degree is something you will need in the world. My dad played the OHL route. Back in Canada, that was the only route you did then. He went to college in the summer for like the first 10 years of his career just so he could get a degree and he’s using that right now. He’s said that’s probably one of the best decisions of his life to do that.


Neal Boudette cover automobiles for the New York Times and writes about hockey any chance he gets.