Q&A with Chris Connolly: A dozen for number 12 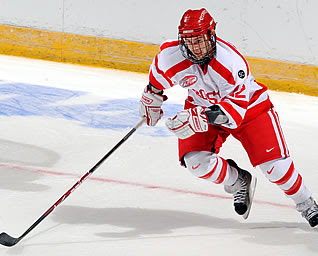 As Chris Connolly approaches his senior season, he is the total points leader among current team members with 89 and, for the second season, team captain. When he arrived at BU in 2008 after a standout USHL season scoring 55 points and leading Omaha to the Clark Cup title, he joined a freshman class that included three NHL draft choices and so was flying under the radar of BU fans. That changed quickly. His dynamic offensive play, speed, and effectiveness breaking up opponents' power-play rushes before they could begin made Connolly an instant fan favorite. He rang up 30 points,including a goal and an assist in the 2009 NCAA championship game overtime win against Miami. While the team hasn't matched that success the past two seasons, Connolly's offensive production has remained consistent with 31- and 28-point seasons. He's expected to be a key cog in the Terrier attack this season. With the 2011-12 opener a week away, Chris answered our questions about leadership and what to expect from the Terriers.

Q. With one season as co-captain under your belt, how will your leadership differ this season?
A. Being one of the captains last year was an amazing experience. I never would have expected to have this opportunity, not only for one season let alone two. I'm very honored to be in this position. As far as leadership goes, I don't think it will really change. It's nice to have almost the exact same team back this year, so that makes my job much more enjoyable; I just plan on working my hardest and setting a good example.

Q. What do the two assistant captains, juniors Alex Chiasson and Justin Courtnall bring to the leadership team?
A. Both Alex and Justin were great choices as assistant captains. They both have emerged in the past year as leaders and are well-deserving of the position. We seem to compliment each other well in the leadership aspect. We all try to work our hardest and set good examples, at the same time there seems to be plenty of vocal leadership when needed.

Q. With only two lineup regulars gone from last season, BU will be a veteran team. In what ways do you expect this team to be different from last season’s squad?
A It's exciting to return so many players from last year’s team. With everyone having another year under their belt and maturing as both players and persons, it can only benefit our team.

Q. Conference games seem to be closer than ever, so that makes one of Jack Parker’s keys to victory—winning the third period—even more important. What can a captain do to reinforce this, especially among younger players?
A. Third periods are, no doubt, deciding factors in a lot of hockey east games. I have been fortunate enough to play in many of them and I think that experience and confidence I’ve gained will help the younger guys get an idea of the importance of those games.

Q. What does the team have to improve over last season if it’s to realize some of the early predictions for a top-ten season?
A We don't try to concern ourselves with preseason polls, even though they are an inevitable part of the beginning of each year. If everyone can take on a little more responsibility than last season and be held accountable for their duties, we will be just fine.

Q. You’ve played both the point and up front on power plays in the past. Given David Warsofsky’s departure, where do expect to be when BU has a man-advantage?
A. Wherever the coaching staff decides is the best position for me to play. I'm comfortable playing either position.

Q. We always ask this in the captain’s Q&A: which returning player (or players) will surprise BU fans by taking his game to a higher level?
A. There are quite a few players that are poised to have breakout years. One who I see picking up where he left off last season is Matt Nieto, who had a really strong second half for us last year.

Q. Tell us about Cason Hohmann. Like you, he’s a smaller forward who put up big scoring numbers in the USHL before arriving at BU.
A. Cason is a smaller, quick, smart hockey player who I think will contribute a lot for us this season.

Q. Do you expect the other freshmen to be early contributors? And how is Yasin Cisse’s health?
A. All of the freshmen have a lot of talent and I would expect them to contribute a lot this year. As far as Yasin goes, he looks strong and healthy this preseason. I'm excited for him because I know he has had a tough last couple of years that were plagued with injury. He is a big, strong kid and I hope he stays healthy for us because he could be a real force out there. [Note: interview done prior to Cisse’s concussion]

Q. There are now two NCAA championship titles in the Connolly family. How exciting was it to see your younger brother, Jack, win with Minnesota-Duluth last season? How intense does the sibling rivalry get?
A. It was an indescribable feeling to watch my brother win the National Championship last year. I'm so happy for him and his teammates. To see it from a fan's perspective and know how they felt after they won is an experience in itself. Jack and I are really supportive of one another and we don't have much of a rivalry. It's more of the drive and push from each others accomplishments that challenges us to be the best players we can be.

Q. How often are you in touch with teammates from the 2009 NCAA championship team who are now in the NHL?
A. I see almost all of them during the summer. Our team stays and takes classes and works out during the first summer term and a good amount of guys from the '09 team come back to Boston in the off season to train with Mike Boyle. It's fun to be able skate with some of them and catch up on each other’s previous seasons.

Q. Minnesotans playing for BU are a rarity. John Curry, Ryan Priem and you are the only ones in recent memory. What would you tell a Minnesota high school player about your experience at Boston University?
A. I would tell them that if ever given the opportunity to come to Boston University to jump on it. I have absolutely loved my time here, not only as a hockey player, but also as a student. The city of Boston alone is enough of a reason to come out here. You get to enjoy four years at a great school, in an awesome, historic city.
Posted by Terrier Blogger at 9:50 AM 1 comment: