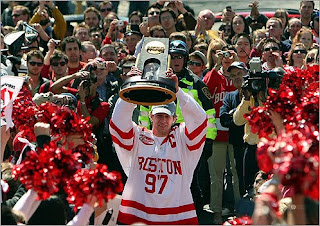 Second in a series of Q&A interviews with former Terriers who debuted in the NHL last season. Brandon Yip Q&A-8/3/10

The storybook path that took Matt Gilroy from a walk-on freshman in Sept. 2005 to three-time All-American, Hobey Baker Award winner in 2009 and captain of BU’s “miracle comeback” National Champions the same year has gained instant legend status with Terrier fans. Just days after the dramatics in D.C., Gilroy signed a multi-year contract with the New York Rangers, enabling him to begin his pro career in Madison Square Garden where his father, Frank, had played basketball for St. John’s.

Gilroy immediately earned a spot in the Blueshirts’ lineup and played 69 games, with a 4-11-5 scoring line. Currently preparing for Rangers’ training camp, Gilroy talked with us about his rookie season in the NHL.

Q If you had to give yourself a grade on your rookie pro season, what would it be?
A. It was a great experience. It was a good first year, but as for a grade, I don't think about hockey like that.

Q. What did you learn during the season that you'd wished you knew about while at BU?
A. Nothing. College and pro are very different learning experiences. While at BU I did not think about what the NHL was like; I concentrated on being at BU. I would not change anything [from my time] at BU.

Q. Was your brief demotion to Hartford a disappointment or a challenge-or both?
A. Being demoted to Hartford is part of playing professional hockey, so it was neither a disappointment nor a challenge rather part of the process.
Q. Obviously the Ranger's just falling short of the playoffs was disappointing, but can you think of a few personal highlights? Perhaps the goal scored against Martin Brodeur?
A. Let's see.....for me, the first game in Madison Square Garden, first game back in Boston, and playing against Yipper and Colin.

Q. Compare the coaching styles of John Tortorella and Jack Parker.
A. Both are intense, but very different. The pro game is much different than college.

Q. What role does former BU Capt. Mike Sullivan play as Ranger's assistant? Which Coach focuses on defense?
A. Mike Sullivan is the defensive coach for the Rangers

Q. What is the best part about playing with Chris Drury?
A. Chris is a quality guy on and off the ice. His work ethic is contagious.

Q. Were the physical demands of an 80 game season what you expected? Did 4 years with Mike Boyle prepare you physically for the NHL?
A. Mike Boyle does a great job! I expected the NHL to be different than college. The NHL season is very long and wears on you physically and mentally.

Q. Are there any NHL rules you d like to see the NCAA adopt and why?
A. None that I can think of right now.

Q. Any interesting experiences on the ice with former BU teammates?
A. Playing against Colin and Brandon was great. Colin and I went back and forth on the ice. When the Rangers played the Avalanche in Denver Steve Smolinsky and his Dad came out to watch Yip and I. It was alot of fun.

Q. Was your first vist to the Verizon Center in D.C. a special moment or just another game?
A. Going back to that building will always be special to me, to anyone who was on the team, and to anyone who attended those games.

Q. Finally have you watched the entire 2009 National Championship game on DVD since that weekend in D.C.? Do the events of the third period and overtime still seem "unreal," as you told the media after the game?
A. I have not watched the video. For me it was a once-in-a-lifetime game and experience. My family and friends have watched it. They all tell me that even though they know the outcome they still go through the same emotions as they did sitting there at the Championship game in D.C. When I think about that game ...yes, it was unreal!
Posted by Terrier Blogger at 7:01 PM