A Throwback from Charlestown 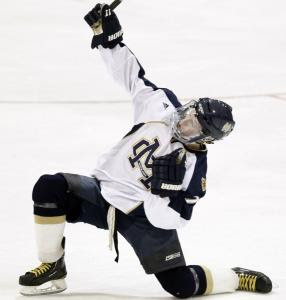 Nostalgia was the theme at the SoNo Ice House in Norwalk Connecticut - home of a new EJHL franchise, the Connecticut Oilers - last Saturday Night, December 22, 2012.  At times, I found myself thinking back to Boston circa 1988 or so.  First, I noticed that a member of the visiting Valley Junior Warriors was named Joe Lappin. Any relation to the brothers who played for BU for a couple of seasons in the late 80’s? I did not ask. Then, I noticed the goalie playing for the Oilers, a guy named “Bruce Racine.” Any relation to the legendary Northeastern goalie? A member of the Oilers told me that it was just a coincidence. And if that was not enough, standing there watching the game was none other than Mark Krys, a solid defenseman for the Terriers from 1987-91 and captain of the 1990-91 squad that reached the NCAA championship game. Those of us who attended BU during that time remember Mark for his surprising goal against BC in the 91’ Beanpot title game and also for his soft-spoken, respectful nature. Tonight was no different as Mark politely chatted with us for a few minutes and signed autographs for my son and his friend.


And the player I came to see, BU 2013 recruit Brendan Collier, played with the intensity that we used to see regularly at Walter Brown Arena in the 80’s and 90’s. Collier, a member of the Valley Junior Warriors, will be a freshman next season. The first thing I noticed about Collier was that, at 5 feet, 9 inches, he was hardly the biggest player on the ice. Not slow by any means, he was not the fastest player out there either. Yet, Collier was drafted in the 7th round in 2012 by Carolina. Over the course of the evening, I gained an understanding of the reasons why.


As was the case in high school leading Malden Catholic to back-to-back Massachusetts Super 8 championships, Collier played on a line with Ryan Fitzgerald (a BC recruit who was as a good as advertised). They made a formidable trio with linemate John Jackson, who leads the team in scoring. On most shifts, they created scoring chances and in the end, they accounted for three of the team’s six goals on the night. Collier tallied a goal and an assist in this game but came across as more of a playmaker than a pure goal scorer.[Note: Collier assisted on three goals the next night in a 6-5 win] He has very good puck-handling skills and also passes well. He was sent out on the penalty kill once or twice and looks good in that role.


What stood out the most was Collier’s intensity. As noted above, Collier is not big but he is stocky. I read elsewhere that, at the urging of the Hurricanes, he added ten pounds to his frame over the summer. He plays a physical, gritty game that you might expect from a kid from Charlestown, Mass. He did not back down from players who had a size advantage over him and was called for a roughing minor late in the second period. The Warriors jumped out to an early 4-0 lead and the game was never in doubt. Still, Collier was playing hard up to the end. He struck me as the kind of kid who does not take a shift off – something that every team needs and that BU has not always had enough of in recent years. With his size, there is a good chance he will stay at BU for four years and it would not surprise me if he wears the “C” a few years down the road.


Overall, my impression of Collier is that he may not be an elite talent but he  could very well be a second or third liner who contributes 20-25 points a season, kills penalties, hustles every shift and scores some clutch goals when the team needs it most.


From what I’ve read and also from speaking to him briefly after the game, Collier seems genuinely excited to come to Agganis Way and wear the Scarlet and White. At BU he’ll reunited with current freshman and fellow “Townie” Matt Grzelcyk. The long-time friends began their youth hockey careers together, along with Harvard freshman Jimmy Vescey.


One other note: The Junior Warriors also featured Division 1 recruits Devin Tringale (Harvard) and Ryan Badger (Maine), neither of whom factored in the scoring. It appeared to me that they have at least two other kids who could play at the next level: Jake Schecter, a puck-moving defenseman and Nick Pichette, a feisty forward who has some skill.
Posted by Terrier Blogger at 3:11 PM