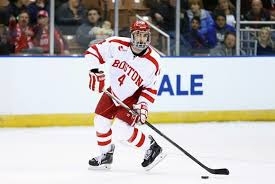 Q. Brandon, why did you decide to return for your senior season? What tipped the scales?
A. First and foremost, Boston is an amazing city and going to Boston University has been one of the most rewarding and special experiences I’ve had in my life. What kept me here is that I feel we are building something special for this upcoming season.  I wanted to be part of it and wanted to help lead the way. It’s hard to want to leave a place like this.
Q. How has playing for David Quinn made you a better defenseman? What's the most important thing he’s instilled in you?
A. He truly is one of the best defensive minds in hockey today; to be honest, he is the biggest reason why I came to BU. He is unbelievable at picking apart all the little details of your game, everything from stick positioning, to body positioning, all the way to the little things in your posture that could be improved to help you defend more efficiently. The most important thing that he has taught me though is how to approach each day like a pro, whether it is a game, practice, or even a lift. He has always stressed coming into each day with a pro mentality.

Q. What are your personal goals for the season and what facets of the game are you looking to improve?
A. This season for me is an important one because it is the last chance I have to leave an impression before I turn pro. With that being said, I am looking to continue improving the offensive side of my game, like puck skills, poise with the puck and playmaking. I want to do all of this without sacrificing anything on the defensive side of the puck.  That is where there is a fine line. However, my main goal this year is to help instill the BU hockey mentality and culture in the younger players, to show them what they need to do to win this year and in the future.

Q. Several months removed from the trade of your draft rights from Calgary in your home province to Arizona, what are your thoughts about the next stop in your career?

A. I’m excited about the opportunity. Arizona is an up-and-coming team with a lot of young talent and skill, which is the perfect situation for a young player to be in. What really helped me feel so comfortable with the move was knowing a good amount of people at camp; obviously, seeing [Clayton] Keller there made me feel right at home and he helped with the adjustment.

Q. As the captain of yet another young team, what are you and your assistants doing to build team chemistry?
A. This year we are putting more emphasis on doing things as a team. We are trying to get everybody to hang out together away from the rink and in different scenarios. I believe that it’s very important to get to know teammates away from the rink; that is where you create bonds and friendships, which translate to a positive environment around the rink.

Q. The freshman class has three drafted defensemen. What will you impart to ease their transition to NCAA hockey?
A. I’m just trying to show all of them that they are here for a reason, so they need to be confident in their abilities and play the game that got them here. In your freshman year, confidence is the biggest key to playing good hockey. For young players sometimes it is easily lost, so I am trying to keep them away from those issues. Confidence leads to better on ice performance.

Q. BU’s defense returns four starters, but loses its top scorer and perhaps its most physical player, a four-year starter.  Can this year’s D-corps be as effective or better at both ends of the ice?
A. I believe that we can be better this year. Obviously it is extremely hard to lose a leader like Doyle and a player like Charlie, but with the pieces that are returning and the pieces that we brought in, I think that we are deeper and complement each other very well. It is weird not seeing those two on the blue-line anymore, but everyone who is here is looking to expand upon their role last season. The one intangible that will help our D-core succeed is our mobility. That is going to be a difference-maker at both ends of the ice. 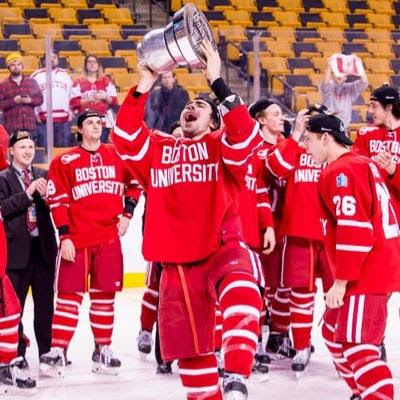 Q. BU led the conference in scoring defense last season, but was fourth in penalty killing at 84.6%. What will it take to improve that number and get closer to 90%?
A. We just need to stay more within the structure that Coach Quinn gives us. We need to understand the reads and the scenarios that require pressure, but can’t get out of position in doing so. Sacrificing your body to block shots is another key and if we do that, our PK will benefit from it. Mostly if we just trust our coaching staff and lock it down the way they want, we will up that percentage.

Q. After two seasons of a power play clicking in the 20s, last year the scoring percentage slipped to 17, what is needed to reinvigorate the power play?
A. We got to get back the puck movement and creativity that we had in my first two seasons. If we move the puck quickly and are aware of the play that needs to be made before we get the puck, it will open up more scoring chances. As a penalty killer, the hardest thing to defend is fast puck movement, so if we can start to instill that mindset in our power play, the skill we have on our roster will take care of the rest.

Q.  We’ve seen your words on the College Hockey Inc. site promoting the college game. What has the college experience meant to you—on and off the ice?
A. It has been the experience of a lifetime, and I wouldn’t trade my experience here for anything. The support that we get from the student body and the faculty is unbelievable and it helps fuel you to go out each weekend and win. To be able to play for one of the best hockey programs in the NCAA and get an education from a university like BU is something that I am extremely grateful for.

Q. We always ask this in the captain’s Q&A: which returning player (or players) will surprise BU fans by taking his game to a higher level?
A. Two guys that I believe are going to surprise fans with their play are Chad Krys and Dante Fabbro. They both had great freshman campaigns but this year I see them taking their games to a new level. So far in practices, I have been nothing but impressed with the two of them and I am excited to see what they do in their second year.
Posted by Terrier Blogger at 10:20 AM