The moment the hockey world learned David Quinn was for real

With 4:08 remaining in the third period of the 2009 National Championship Game, the winningest team in the illustrious annals of BU Hockey was now on the verge of losing its last game. The underdog Miami Red Hawks had just extended their lead to 3-1. Without hesitation BU associate head coach David Quinn approached his current boss and former coach Jack Parker, the  iconic 36 year mentor, the man who had recruited and coached Quinn, a first round draft selection of the Minnesota North Stars, a quarter century earlier.


The associate head coach offered a bold unconventional observation “The next offensive faceoff I think we’ve got to pull him (goalie Kieran Millan).” Checking the clock Parker was not convinced. “There’s a lot of time.” Quinn persisted. “We’re on life support right now.” The Terriers' prolific offense had been effectively neutered by the Red Hawks for most of the third period. Parker’s top lieutenant and “defensive coordinator.” supported by assistant coach Mike Bavis. recognized that the Terriers needed to fundamentally alter the game’s direction.


Following a time out at the 3:31 mark, Parker acquiesced to his associate’s plea and Millan vacated the BU crease. The Terriers established near-permanent residency in the Miami zone, tallying twice with the extra attacker in the final minute en route to a stunning 4-3 overtime victory at the Verizon Center in Washington, D.C., to capture the program’s fifth National Championship.


At the post game press conference, Parker gave full credit to Quinn for suggesting the move that resuscitated his hockey team.


Some eighteen years earlier, Parker’s Terriers found themselves in the unenviable position that they had been in the previous year. Providence College’s routinely spectacular goalie Chris Terrerri was on his way to leading his Friar club to victory over favored BU in the 1986 Hockey East tournament semi final round for a second consecutive season. Trailing 2-1 late in the third period that rabid Terriers had the apparent tying goal disallowed.


Without hesitation a scant :16 later All-Hockey East BU sophomore defenseman David Quinn pinched hard to the half wall in the Friar zone, gained possession of the puck and threaded a pass to the Terriers all-time leading scorer, John Cullen to set up the tying goal. The Terriers went on to a stirring 3-2 victory and then captured the Hockey East title the following night crushing arch-rival Boston College 9-4.


This past January, the Boston University hockey team was a disappointing 8-11-1 after the first semester. Acknowledging that “you are what your record says you are,” Quinn, without hesitation espoused to his hockey team his belief that they were the “best team in Hockey East.” The Terriers embarked on a 14-2-3 run that included the Hockey East Championship before falling to Michigan in the NCAA Northeast Regional final. The unwavering faith of the head coach was rewarded with an impressive sustained stretch of winning hockey. 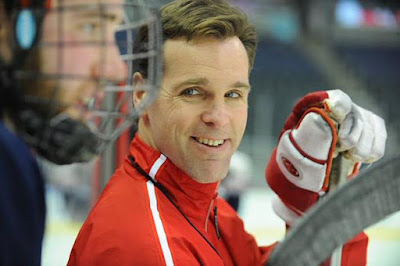 Denizens of the race track often talk about their most telling observations being made around the paddock. As someone who has known David Quinn for over 30 years as a player, associate coach, and head coach at Boston University, let me assure you the New York Rangers are getting a thoroughbred.


A man who was forced to handle a career-ending medical diagnosis to his playing career, he soon channeled his passion for the game and consummate competitive nature to coaching. The results have produced a winner at every step on his twenty-five year Odyssey leading up to this New York minute.


Expect the Rangers' new coach to bring an up-tempo, puck possession approach that will allow for offensive creativity while stressing the all-important concept of recognizing the appropriate time of transition to the defensive side.


Coaching defensemen and the defensive aspect of the game has been a priority for Quinn. In fact all six of BU’s blueliners on the 2009 National Championship team – Matt Gilroy, Kevin Shattenkirk, Eric Gryba, Colby Cohen, Brian Strait and David Warsofsky went on to play in the NHL. An unprecedented achievement for a college hockey team and a testament to Quinn’s ability to develop players at the position.


This veteran observer is predicting a long-running Broadway hit. I’m not sure he could outrun Justify but David Quinn has passed “The Test of the Champion” while overcoming the adversity of a promising playing career that was curtailed to become an elite coach. There will be 40 performances of “Mighty Quinn and his Rangers” beginning in October. Be sure to catch the show, Ranger fans.


Bernie Corbett has been the “Voice of BU Hockey” for 33 years and Harvard Football for 20 years. He has authored, co-authored, ghost written and contributed to two dozen books including an oral history of the Most Memorable Games In New York Giants History and Rolling Stones 50 Licks with the late WNEW and KROCK disc Jockey Pete Fornatale for Bloomsbury Publishing.