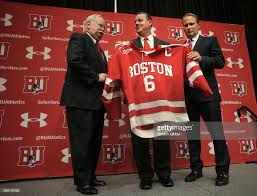 Shortly after being named the 12th coach in the history of the B.U.’s men’s hockey program, Albie O’Connell “killed” his daily commute from Comm Ave to his home by talking me to about the transition to head coach, his hopes for the coming season and the new assistant coach he’s brought on board.

O’Connell, 42, played four years under Jack Parker from 1995-96 through 1998-99 and was the team’s captain his senior year. His cumulative scoring line while at B.U. was 42-66-108 and the teams he played on appeared in the NCAA tournament three times, including two Frozen Fours and the 1997 national championship final. He was part of a senior class that never lost a Beanpot game, taking the title in each of their four seasons at B.U. 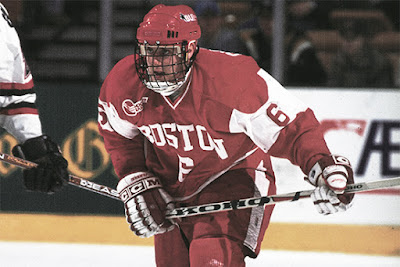 In the course of the interview, he revealed the answer to a critical question that crops up regularly whenever his name appears: Albie is short for Albert, which was the name of one of his grandfathers.

This interview has been condensed for clarity.

Neal Boudette:  Congratulations on being named the head coach at Boston University. Did you ever think you'd be in this position, head coach at B.U.?

Albie O’Connell:  Honestly, not really.  Coach Parker stayed 40 years and Coach Quinn was there and then I just thought things are going well. I was happy to be a part of it now working with them, working for the program and trying to win the national championship.  Then, all of sudden Quinnie is gone, there's a possibility, and it worked out.

NB:  So how does your role change now as head coach?  You won't be out as much on the recruiting trail as before.

AC:  No, it changes because you're running the program.  So, you're a little bit more in-house.  You're managing the guys around you and below you, and what the players have to work on.  Obviously when you get to our level, it's a collaborative effort.  But at the end of the day, the guy who's in charge is the head coach. So that's something that's different. It's going to be probably less travel, a little bit more involved on the ice.  And being with the team every day, keeping strong relationships with the players, and making sure all aspects go right, the social piece--the academic piece and the hockey, making sure that everything runs smoothly.

NB:  What are your expectations for this season?

AC:  Well, sky is the limit, really.  We've got good scoring depth, we've got good depths on defense and we've got strong goaltending. We want to win the national championship and that's our goal every year. We now have a chance to do really well if we to come together and we're going to keep getting better from day one .

NB: You do have lots of depth up front, on the blue line, a really good goalie. But maybe you don’t have a really dynamic player like a Keller or an Eichel.

AC:  Well Patrick Harper is a dynamic player and I think he only had two or three points less than Clayton Keller did in his first year.  He was on track to top 40, 50 points this past season until he was sidelined for second half of the year.  He is going to be able to do that and we have a lot of guys who are sophomores. You could see Shane Bowers having a huge year and then we’ve got Bobo Carpenter.  A lot of really, really good players could potentially make big jumps.  Some guys could go from 20 points to 40 points and some guys could go from 30 points to 60 points.  We have two potential potential All-Americans in Chad Krys and Dante Fabbro, and then a guy like David Farrance, who was coming on pretty hot down the stretch last season.  He's got a chance to give us a dynamic offensive player from the backend on top of it.  So I think we've got a lot of very high level players, some guys that have been brought to their full potential.

NB:  Do you plan to change the way the team plays?  Any aspects that you think they need to improve on? 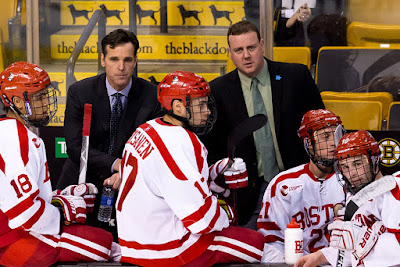 AC:  I think if we just look statistically, I think our penalty kill could improve. That's one area that got better during the year. We started out very slow and then got better once we figured out the personnel and guys playing in positions where they were comfortable. I’d like to be a fast team.  I think we've got four lines that can push the pace. I think overall, hopefully, we can carry the momentum that we built the second half of this year, with a lot of the younger guys who made gains throughout the year and can just hit the ground running this season.

AC:  I actually got a lot of texts while the process was going on, saying that hopefully I get the job.  So there was comfort when I was chosen to lead the program. I think there was comfort from a lot of the guys who already committed to us.  Because one, I know their families. Two, I know them as players and they’ve known me and Lenny [Quesnell] as well as anyone, even more than Quinnie because we saw them play a lot more and we know that they can do.  I believe there's huge value for them. The structure of the program is going to stay the same.  A lot of the people are going to stay the same and we have their best interest.  So there's a lot of factors that makes them probably more comfortable than if the head coach was someone who didn't have a relationship with them. That makes it a lot easier that, and there's believability for the players. It’s exciting for B.U., it's exciting for myself and I think it's still exciting for them to come here. 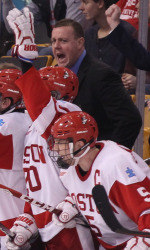 AC:  We're definitely different personality wise.  I think we're both pretty driven in what we do in coaching and we expect excellence on the ice.  I think we both we probably have a different tone and demeanor and delivery, but at the end of it all, we both want the team to compete at a high level and execute in a lot of different areas. We have the same core values about how we want the team to play. My demeanor would be a little bit different than his just because we have different personalities and we're different people.  I hope to continue the tradition of B.U. hockey. We're always going to be a highly competitive team.  We're going to want to be a team that, at the end of the game, the other team is going have to beat us to win.

AC:  Paul Pearl will be the new assistant coach.  Paul is a true professional.  He's a great coach and a great communicator.  He understands the game at a high level.  He's very good individual player coach, he's very good on the ice.  I've worked with him in the past and he's one of the best in the business.  And he's been a head coach.

NB:  Any other changes in the staff?  Lenny Quesnell came aboard last year under David Quinn. Is he's staying?

AC:  Lenny is staying.  I was really excited that Lenny wanted to stay on board. Lenny, like Paul, is a true professional.  They're both been head coaches before.  They’ve both run programs.  They both recruited and scouted.  They're very well versed in all areas of college hockey. The biggest thing for me was just the personality piece.  They're both have great personalities.  They are able to deal with young players and able to push them but also have a good relationship with them.  I'm just really excited that Lenny wanted to stay at B.U.
Posted by Terrier Blogger at 2:03 PM